May is Always Special, if Mixed on Merry

Welcome to  Jim’s Approximately Monthly Missive for the “Merry Month of May” a familiar alliteration if not always true. My birthday is in May, but my father died a couple of days before I turned 18 in 1980 when he was only 44 (of melanoma, since people tend to ask). I’ve written about him before. He was wonderfully loving and also very even keel. The conjunction in time leads to conflicting emotions of joy and loss, celebration and mourning. I try not to hold myself to having any preset feelings, especially at this time of year. (Note to self: Find a photo of my dad and me.)

May Day is fun to celebrate as an activist and neo-pagan, usually dancing several maypoles a year. So far I have danced two. I like the effect of passing people in a dancing circle making eye contact with people in a safe, frolicking,  but often intense way. I like spiral dances for this reason too. It’s magic! 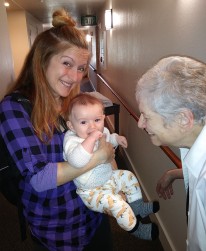 Now that Eamon is in the world, I don’t feel that “fatherlessness” is a thread running through my adult life. Another blessing of Eamon! Pictures of Eamon’s joyous Bay Area visit with Lacy in April will run throughout this Missive rather than being ghettoized at the end. I can’t stop looking at the news or sharing both harrowing and motivational items, so I can’t just turn this into a baby fest.

Still, I am so happy to have given such a bubbly, giggly, gift of life to my mother for her birthday: a grandchild! (Not that Eamon is hers or anyone’s but themselves.) “I’m so happy I could just shit!” is a thought best left to the little one, but I kinda feel like that too. (Insert big laughing emoji.)

Stand with Ilhan Omar! Don’t Repeat “Moderate” Put-Downs of Her or of AOC or the Other Rad Women of Color Stepping UP

Don’t be confused into doubting in Ilhan Omar or AOC or the other inspiring new US politicians. We need to tell the “moderate” Democrats to get on board or we’re doomed. Joe Biden isn’t a safe bet. He’s at least as uninspiring as Hilary Clinton. I hope you will join me in voting for whoever runs against Trump in 2020, but don’t think a more establishment figure has a better shot now than in 2016.

Ilhan Omar in her own words makes me gush and shout out loud in relief and joy. She knows who she represents and why she’s there. It is uplifting to watch and hear her speak! (Thank you Democracy Now! for airing her speaking. It is mind-bending reality that other media outlets speak of her but don’t show her speaking.

“A Message from the Future with Alexandria Ocasio-Cortez”  is a six minute video that was written by the New York Member of Congress with Naomi Klein and animated by Molly Crabtree. It was published through The Intercept, a very important news source. It is moving, motivational to helpful for seeing a future that isn’t dystopian. [Side note: My computer doesn’t recognize the word dystopia or dystopian!] That it came from an elected official but isn’t just saccharine bosh made me sigh and hoot out loud in the kabob place I was sitting in when I first watched it. There was some important and little known history in there too.

Make no mistake about it. Nothing President Twitter and his team are trying to do to Venezuela has any sincerity or positive intent. US sanctions and sanctimony from numerous administrations has fostered the terrible internal divisions now at fever pitch. President Twitter is destroying much of international relations and statecraft so that all that remains is for US arms manufacturers to supply despots so we and our friends can all eat bullets. (Artist friend: Send me a graphic with T’s face on Marie Antoinette’s body saying, “Let them eat bullets.”)

Here is an update I received this morning (May 3) from the Embassy Protection Collective in Washington DC:

Activists Continue to Hold Venezuelan Embassy in Washington
Pat Elder
World BEYOND War
May 2, 2019
It is Thursday evening and I am reporting from a meeting of the Embassy Protection Collective in the ambassador’s conference room in the Venezuelan Embassy in Washington.
Determined activists are currently discussing the logistics of their continued struggle to retain possession of the embassy. They have managed to overcome a host of challenges since responsibility for the embassy was officially turned over to them when Venezuelan diplomats who represent the legitimate government of Nicolas Madero were forced out of the U.S. last week.

Activists are currently unable to enter the building. When members of the collective arrive at the embassy, Guaido supporters, right-wing extremists, sound an ear-piercing alarm, similar to the blaring sound of an emergency vehicle, to rally opposition folks to physically block activists from entering and to seize the opportunity to storm the compound. Meanwhile, Secret Service Police explain to the barred activists that they’re precluded from entering because they don’t have authorization from the “legitimate authorities,” meaning representatives from the Guaido government.

The dozen or so Secret Service officers seem to have bonded with a few dozen pro-coup forces who have displayed outrageous, unruly behavior like the blaring bullhorns that are sounded a few inches from the faces of anti-coup folks, many of whom had been in the embassy but left and were precluded from re-entering the building. The angry, combative counter-protesters have bullied the highly-disciplined peace activists and covered the ground floor windows with pro-Guaido literature. The Guaido folks have been free to bang on the exterior doors while the police stand idly by. They have destroyed exterior surveillance cameras and embassy property.

Legitimate Venezuelan authorities with the Maduro government in Caracas say the possible takeover of the embassy in Washington by Guaido’s people represents a “grave violation” of the United States’ responsibilities and violates international law. Venezuelan diplomats gave the keys to the embassy to the activists with permission to remain until a permanent protectorate can be found. President Maduro is aware of the situation and extends his support to the Embassy Protection Collective. 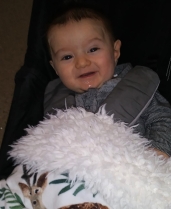 On Thursday afternoon, the Secret Service allowed in some food and medicine while the State Department expressed interest in meeting with members of the Embassy Protection Collective: Code Pink co-founder, Medea Benjamin, DC attorney Mara Verheyden-Hilliard, and ANSWER Coalition Director Brian Becker. As of Thursday evening, that meeting had not yet taken place. Meanwhile, activists in the compound are hopeful they can retain possession of the premises.
Verheyden-Hilliard slammed the Secret Service and the DC Metropolitan Police in a letter earlier Wednesday. She wrote, “Your officers are acting as aiders, abettors, encouragers, and joint tort-feasors in the assaultive, menacing, threatening and at times violent conduct against the lawfully present peace activists at the embassy by a mob of right-wing thugs,”
The activists in the embassy understand this is an historic moment. Adrienne Pine, an Anthropology Professor at American University, is among the members of the collective in the embassy. She echoed a theme among the activists that Americans generally have a poor grasp of history. She explained her presence, “The 2009 U.S.-supported coup in Honduras led to a murderous, neoliberal fascist dictatorship. The subsequent U.S.-backed legislative coup that ousted Dilma Rousseff in Brazil led to Bolsonaro’s openly fascist regime, which threatens the survival of the entire planet. There is no way I could not be here, knowing what I do about where this coup—if successful—would inevitably lead.”

Is it Genocidal yet?

In 2016 and 2017 I was part of two Center for Jewish Nonviolence (CJNV) delegations. I decided I couldn’t go on the one that is there now, as I type. I hope to go on the one they expect to lead sometime in the fall. I’m getting news from them. As I type, Susiya has been suffering more demolitions, and in the last 24 hours Um Il-Khair went from threatened to demolished. I don’t know what is left, if anything but I have seen photos and videos from friends there of the destruction in process. Social media has kept us in touch in meaningful, interpersonal ways. Hopefully we can also translate that into political power, if not immediately, then soon!

I close with a letter/post/question I shared this morning with the Jewish Voice for Peace national member forum. If you have any qualms about JVP, make sure you check out their/our website to know what we are actually about. Don’t believe what the David Horowitzes or the Simon Wiesenthal Centers or the Jewish Federations or the JCRCs the Democratic Party leadership say about JVP. Check out our ideas and work in our own words. 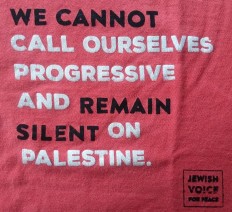 Are things finally getting so bad for Palestinians (prisoners shot while in custody, already injured and laying on the ground; children in tortuous jail conditions; Palestinian tents in Susiya and structures in Um Il-Khair demolished; old city Hebron and East Jerusalem being bulldozed out of Palestinian presence; anti-BDS laws criminalizing their right to speak and organize; frequent racist statements by politicians and the public (going back decades); and Gaza, Gaza, Gaza) so that calling all of this “genocidal” won’t garner the stultifying pushback (from friends and others) it once did? Are people’s relationship to “the g word” changing just as people’s use of apartheid have evolved into obvious acceptance?

Is there still seeming benefit to hiding such thoughts of genocide away? At what point do we need to venture even further into ostracism before we name an emerging truth we strive to stop? Maybe there is no utility to using such a loaded (if true) word. I don’t mean to throw it around loosely, but maybe I do hope that the intensity of the word will help awaken people to the urgent and dire situation at hand. 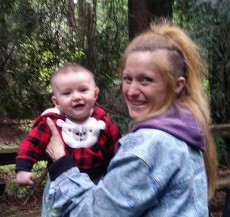 Just as global, catastrophic climate change is something we’re still on the verge of, the full suicidality of the direction in which we’re pointed not quite irreversible, so too mustn’t we raise alarm bells about the genocidal fight for their lives that the Palestinians are engaged in?

God bless Palestinian resilience, love and children for making the genocidal aims we are also fighting against less likely to succeed.

I actually started this post after viewing current and past cartoons by Antonio Antunes Moreira that have garnered him the epithet of being anti-Semitic. Yesterday the New York Times dropped the syndicate through which his cartoons are promoted. This J.Post piece shows both the new image and the one from 1982 during the Lebanon invasion that drew directly on Warsaw Ghetto imagery for ‘inspiration.” I don’t think either cartoon is antisemitic (though I think the metaphor from his older image is more apt), and I am glad that the artist is standing by his politics. If JVP is called to stand with him, I hope we do. I confess not to be an expert on Moreira, but seeing the image he chose to run way back when makes me want to come to his defense now. Seeing the horrific direction Israel was heading back then was prophetic or just having his eyes and ears open. He saw the genocidal direction in which I/we were being led and created a powerful, evocative juxtaposition that rings even more true today than it did in 1982.